Much 13, 2021 - added a page showing my restoration of a 150 year old Nottingham style fishing reel.
​Sept 22 2020 - added a page for Early British Multiplier Winches adding back to circa 1800. This is a portion of my virtual display at the 2020 ORCA Annual Convention.
March 20, 2020 - minor edits. Today, we are in the early stages of the Covid-19 pandemic. Reels are a great distraction at this time.
​July 25, 2019 - minor edits
Oct 16 2018 - Added pics of rare Ontario metal lures.
Oct 4, 2018 - Added pictures of my latest bamboo rod creations to the bottom of the gallery on this page.
Sept 11, 2018 - Updated the list of Canadian Reel Makers (and resellers of trade reels with Canadian marks).
Aug 20, 2018 - Added a link on the catalog links page to a fascinating 1904 sporting goods catalog by Lengerke & Antoine containing lots of great reels and lures!
July 23, 2018 - Added a pic of some recently acquired ALW lures, including a trio of Mambos on the Lures page.
Mar 3, 2018 - Added a picture of a Hoosier Indiana style reel by Shakespeare into my picture gallery of Indiana reels.
Feb 20, 2018 - Added a link on the homepage leading to info about the 2018 ORCA Annual Convention. Added a page showing my bamboo fly rod making project. Added a link on my homepage to the Scarborough Fly and Bait Casting Association (SFBCA).
Aug 3, 2017 - Added a link to The Book of the Black Bass, by James A. Henshall

April 30, 2017 - Amended list of early Canadian reel patents by Canadian inventors and added article by Paul Manuel and Alan Baracco.
April 29, 2017 - Added a link to the 1938 Catalog of Weber flies and tackle
March 31, 2017 - Added pictures of an AL&W Zephyr centerpin reel shown in the 1929 AL&W catalog. Look at the bottom of the gallery.
March 29, 2017 - Added a copy of my article: The Reel Connection Between Lawson Machine Works and Burlington Metal Products and a few relevant clippings at the bottom of this Lawson/Burlington/Major picture gallery.
March 24, 2017 - Added the Brenco story and a few images to the Brenco page.
March 9, 2017 - Added pictures of a Canadian fly reel marked Major Rod, Montreal. Other than the company name it is identical to the  design of the Lawson Laurentian No.2, so assumed to be a Lawson trade reel. Note that Lawson fishing rods were probably made my Major Rod. Refer to my article on Lawson in the March 2017 ORCA Reel News and coming soon to the CAFTA newsletter.
Feb 5, 2017 - Added page for Early Canadian Patents of Fishing Tackle Registered by Canadian Residents. The is the precursor of a large Canadian fishing patent research project underway by Alan Baracco and Paul Manuel. Let me know if you are seeking early patent info. We have a large database started.

Be sure to check out the sketches of Fowler Gem reels in 2 sizes in the 1884 A&I catalog.
Aug 3, 2016 - Added pics of recently acquired/cleaned reels including an EVH #621 on the Other Favourites page.
June 27, 2016 - Added Hobbs to the list of makers of 19th century folding grasp brass reels, added picture of a hammered, silver plated Delany Cobourg Spinner (that has since found a new home). To the bottom of my Other Favourites page added pictures pictures of recently acquired Frankfort, KY reels by Milam and Meek & Milam. To the bottom of the AL%W reel pics page, I added picture of a recently acquired AL&W trolling reel in box. To the bottom of the other Favourites page, I added pics of a Julius vom Hofe 1/0 surf casting reel that I "rescued" for a friend as well as a huge 4 1/3" Trowbridge salmon reel with brass and rubber that I refreshed for myself. At the bottom of the AL&W reel page, I added pictures of a Spiral Wind Reel with Canadian patent mark as would have been sold by AL&W- THANK YOU FOR THE GIFT MARK S.
May 25, 2016 - Added pic of a tough Strawberry Wigglefish that has just found a new home.
May 13, 2016 - Added an article: The Ambassador Fishing Reels of Tugg & Mason Limited, by Paul Manuel, January 11, 2016.

May 10, 2016 - Added an article: The Cornucopia of Fishing Reels Offered by AL&W by Paul Manuel March 29, 2016.
​                          - Made minor administrative edits.
May 8, 2016- Added pics of R&L Lewis ball handle multiplier on this page. Added pics of newly acquired Canadian reels including a green Branson Kawartha, a reel by Engineering Products- Montreal , a Meek & Milam #3,  a Beetzsel Washington DC with falling line guide, and an early second Douglass patent Pflueger Supreme.
May 2 & 3, 2016 - Added a picture page for Bata Shoe Company of Canada and their Trent Valley reel and added& modified pics and captions.
April 22, 2016 - Added page for more pics of Lawson reels.
April 15, 2016 - Added an article about SANDS Toronto.
April 6, 2016 - Added a placeholder for Inglis-Shakespeare and some box papers for an Inglis-Shakespeare 1850 reel
April 1, 2016 - Added pics of a pair of AL&W marked Montague rubber sided reels, circa 1930 to the bottom of the AL&W page. One is the 80 yd model and the other 60 yd. The smaller one has been sent to a new home.
March 31, 2016 - Added an image of an Inglis Shakespeare #1850 closed face spinning reel in box with papers in the miscellaneous Canadian marked reel gallery and also posted images of an AL&W Venus Minnow on my  lure page.
March 28, 2016 - Added images of Fraser-Hardy Lovell/Montreal directory listings for 1950 through 1958. Re-organized pages of Canadian Reels and added a page for reels by Lawson Machines Works Montreal (and Burlington Metal Products, VT). Added a page for Tugg & Mason Limited, New Toronto.
March 16, 2016 - Updated list of Canadian Reel Makers (to include Bicycle Sales Co. of Winnipeg, Manitoba who made a Kentucky style reel patented in Canada in 1923). Added pictures of the Fraser Montreal fly reel after cleaning.
March 9, 2016 - Added a Hardy/Fraser Montreal ad that ran in the July 1922 edition of Rod and Gun in Canada. The same ad ran for many months in that magazine.
February 3, 2016 - added pics of the cleaned up nickel plated Julius Vom Hofe ball handle reel with cloverleaf logo at the bottom of the ball handle topic page. Added a picture of a rubber sided Montague reel marked: "Alcock, Laight & Westwood, Toronto".

Coming soon in the March 2016 ORCA Reel News, see my article on Ambassador reels made by Tugg & Mason, Toronto. T&M reels can be seen on my page of Canadian marked reels.
Jan 20, 2016 - Added pictures to the bottom of the ball handle multiplier reel page of a recently acquired Julius Vom Hofe with rare cloverleaf logo made 1882-85, rim brake, nickel plated brass (prior to cleaning).
Jan 6, 2016 Edited text on the page about SANDS reels to acknowledge publication of my article in the Jan 2016 edition of ORCA Reel News.
Dec 24, 2015 - Added a picture of a green Laurentian #2 Fly Reel made by Lawson, Montreal at the bottom of my Canadian marked reels page.
MERRY CHRISTMAS AND HAPPY 2016!
Dec 10, 2015 - Added pics of a rare Bulloch Spinner made in the late 1800's in Gananoque, ON. This is one of only about a dozen with this maker mark ever found by collectors. Added pics of other interesting reel acquisitions.
Nov 29, 2015 - Added pictures of three vintage Canadian reels made in British Columbia by Cemm, Coates and Peetz. I cleaned up the Peetz. The Cemm which is a mooching reel with features of a Hardy Silex appears to have been never used. The Coates is an all aluminium wide drum model. 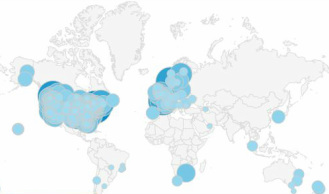